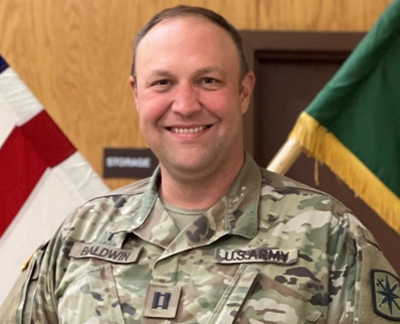 Personal Story
Chaplain (CPT) Richard L. Baldwin was born in Wurzburg, Germany on October 5, 1978 into the home of an Army Combat Engineer. Richard received his Eagle Scout from the Boy Scouts of America in 1993. Following graduation from Apple Valley High School, in Apple Valley Minnesota, Richard attended the University of Nebraska-Lincoln (UNL), where he graduated with a BS in Civil Engineering in 2002. He immediately began working at the consulting engineering firm of HDR in Golden Valley, MN. From 2003-2006 he worked on a poster project for the Minnesota Department of transportation nicknamed ROC52. 2006 Richard was transferred to HDR’s headquarters office in Omaha NE to assist in construction inspection on the Platte West Water Treatment Facility in Wahoo NE.

While at UNL Richard participated in the Navigators, a Christian student organization through which he came into a personal relationship with Jesus; a catalyst for his future ministry. By the spring of 2011, the calling to vocational Christian ministry was clear and Richard resigned his position at HDR to enroll in seminary. Richard attended Covenant Theological Seminary (CTS), St. Louis, Missouri from 2011-2016. He graduated with a Master of Divinity degree in May 2014 and again in 2016 with a MA in Counseling. In 2015 Richard responded to a call to serve as an assistant pastor at Grace Central Church, a Presbyterian Church in America (PCA) church in Omaha, NE. Richard served as a bi-vocational minister from 2015-2017. Upon graduating with his counseling degree, he began working towards his professional licensure as a mental health counselor. During these years, Richard’s love of the military was rekindled. In January of 2018 he was commissioned as a First Lieutenant in the Army Reserves (USAR) as a Chaplain. After successfully completing his Chaplain Basic Officer Leadership Course in December of 2018, Richard and his wife felt the Lord’s call to Active Duty service. The PCA affirmed this calling and heartily endorsed Richard to serve as an Active Duty Army Chaplain. Richard is committed to living out this calling to love God and neighbor as a Chaplain and to serve both God and country with integrity and vigor. Richard is married (2003) to the former Jeanna Trost. They have four children, Esther 16, Samantha14, Tobias (Toby) 12, Thomas (Tommy) 10.